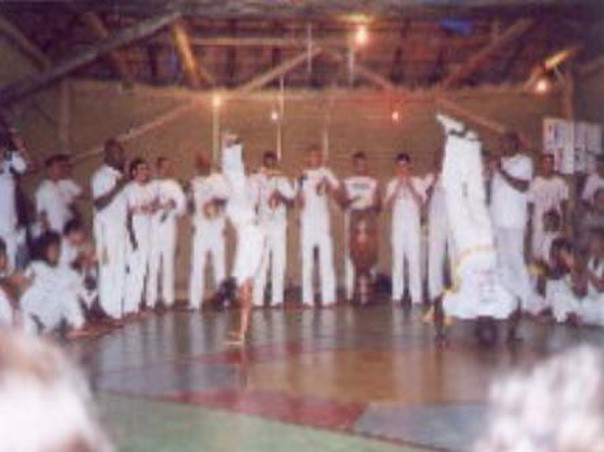 Brazilian popular culture seduces us with its rhythms, gestures and colors. With the completion of 500 years of its "historical denudation" to the world, Brazil revises and renews various cultural manifestations that settles a particular pattern to our people. Creativity and hidden sufferings, natural beauties and social contrasts form the Brazilian popular culture "rainbow".

Capoeira stands out in this cultural universe from its multiple possibilities of circumscribed experiences in its "knowledge body", offering various forms of feeling a unique exhibition that is expressed by those who experience or watch a Capoeira Circle (Roda).

Music, chant and corporal expression get together to reveal all the "camouflaged" historicity in capoeira player swinging. In the beginning, this verb was used to overcome an unbearable social reality characterized by black people slavery in Brazil during the Colony Period. The seignorial and proslavery system ruled Brazilian society outlines nowadays: unequal, excluding and unfair.

Later, during the Imperial Epoch, swing (ginga) searched the transposition of "given liberty" to "conquered liberty" through political "agreements" based on the razor. The 'sardine', as our ancestors used to call it, was significant instrument for black people fight to conquer their social space in this historical period.

Came the Republic characterizing capoeira as a social crime, considering those that practiced it as criminals. They became clandestine people. They went out of scene. But, how can a law or an institutional power annihilate a social practice in which was based the fight for people freedom?

That is why the New State had to submit the law to the social pressure and (re)consider capoeira as a popular expression way. However, as the fascist power could not conceptualize it as a people language expressed by the body, relegated it to the sponsorship of a sport, a practice that led to discipline.

And today? Why do we swing? For sport? For pleasure? For therapy? For education? We swing for all these reasons and for many others that we will have if we look for the testimonies of those who practice and perpetuate this art, "mandinga" (witchcraft) and malice or, in capoeira player language, laziness (vadiação): "Iêêê... vamo vadiá, camará?"

Politics, history and culture, as different angles of a same mosaic, had in Rio de Janeiro streets their most elegant "exposition gallery". Almost in the beginning of the XIX Century, legs, razors and "leva-leva", synonym of shouts and rushes persecuting or running away from the enemy, formed a masterpiece, engraved with details deep in the Brazilian people soul. Nowadays, these popular statements are being incorporated with new treatment forms, tending to turn capoeira in a more "sportive" practice and its submission to cultural industry. Their legs got new esthetics: athletic, the "sardine" is now restrict to special shows in restrict sites and "leva-leva" can be watched if we notice the increasing number of academies and professionals that show up each second in Brazil or abroad or "barra afora, camará"!

This way, we must understand from where we came, in order to clarify who we are and, then, justify a future perspective. Coherence, this is the key word: C-O-H-E-R-E-N-C-E! So, capoeira can be seen as the result of a dialectic relationship between theory and practice. Within these words, in practice the theory is a dialog driven movement. So, down with cords, strings, academies, ID cards and councils dictatorship! "Vamo dialogá, camará!"

Virtual sex, virtual circle? In a world "connected" with technology, human creativity demonstrates to be unlimited. And how about the meeting? Daringly, as only a literary daydream allows us, we affirm that: "Forgive me the Internet users, but the meeting is essential, ideas may arise, from the ideas... ideals... and so? The changing action, when we glimpse the possibility of ideological inversion of a class representative society as the Brazilian one, is absolutely feasible, even more if we outline reality by popular culture point of view. This search may subvert the capitalistic hegemony, allowing a new historical walk not countersigned in the exclusive values that go through North to South the country we live in.

"Iê, camará! Vamos à luta! Melhor, vamos à ginga!" In Capoeira’s Art privileged locus: the street! As in the XIX Century? Not anymore. Street ideological space, plural and political, should be established on a permanent basis in capoeira player’s heart. With rules and concerns, why not? But, searching, above all, pleasure, conquest, transcendency in their different perspectives: personal and social - poetry!!! Summarizing: the meeting. This is our space to be conquered again! Not anymore based on power quarrels with violence backboard, but on power relations understanding where the public, the collective is loosing space and references to the private.

So, we go back again to the XIX century, when we affirm that it is necessary to vivify in our hearts capoeira’s "gangs solidarity", where their participants general welfare explained the union of different ones, free or freed, black or white, Brazilian or immigrants and made explicit the "socially equal ones" condition - urban slaves. We underline here our disagreement related to the relevance of the "methods" used by those capoeira’s groups nowadays, although the similarities that we might speculate the difficulties of survival and adaptation of reordering the world of work that occurred in the past and the present historical moment we are living in. However, without denying the conflicts that existed inside slave population, we highlight the gangs political activity and the capability to deal with cultural differences as possible parameters of social engagement of professionals and skilled workmen of this popular practice.

To delay temporarily the discussion, we believe in swinging just for the right of swinging. To swing for emancipation of man as citizen that could and should access the cultural collection of the society he belongs to. Without retaliations for the color of skin, social class, age, sex or whatever is the reason for any kind of discrimination. Swinging for the right of being a body. Body that symbolizes and uncovers the Creator’s insight, no matter "Oxalá" or God, to build us as Diversity and Unity. Sacred and Profane that walk, distinctively, together in the Totality. Or even if we prefer to show some erudition: thesis, antithesis and synthesis: dialectic again. This way, the paradox is fascinating!!!

As the old master would say, while lazing: "ancestor, spiritual, transcendent way!".