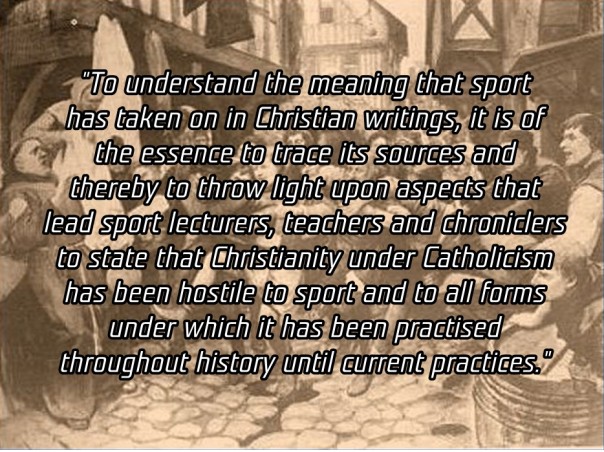 In the First Letter to the Corinthians written in 96 by Peter’s fourth successor as Rome Bishop, as Saint Irenaeus bears witness to, Saint Clement offers some important allusions not only to Peter and Paul as “the champions that have most recently lived”, but also to Perpetua and Felicitas who “immersed themselves in the firm career of faith”, when they were executed in the Roman “spectacle” of the amphitheatre, Clement makes use of athletic language of its time to say that they also were “faith champions”.

The reference to the games as the appropriate language to refer to martyr’s greatness of strength employed by the first Fathers of the Church is found also in Saint Ignatius of Antioch. The triumphal entrance of the emperor Trajan into the city of Rome, after having conquered Dacia, current Rumania, was marked with one hundred and twenty three days of spectacles, where nearly ten thousand gladiators fought and died in circus games.

Quoting Paul’s First Letter to the Corinthians, Tertulian urges further on the Pauline analogy between athletics and Christian life: “And these –according to the Apostle- do it to gain a perishable garland, while you to gain an eternal one, he exhorts them to think of imprisonment as an Arena, (where boxers and fighters trained for the contest), and to feel that after leaving prison to the tribunal, they had left a stage behind. Tertulian referred to the recreational ritual contests of the Greeks.

Due to the prohibition by the Fathers of the Church to Christians from attending, witnessing and taking part in recreational spectacles, it is to be noticed that earliest Christians enjoyed taking part as spectators in these festivals; Saint John Crysostom in his “Homily against spectacles” regrets that Christians preferred “willingly” horse races and misliked “angrily” the “sermons and instructions” wherein their attendance was forbidden.

In the second century the Fathers apologists include in their writings, now more vigorously, the prohibition of attendance at spectacles of recreational gladiator fight in order to defend the accusation of anthropophagi that was then against Christianity.

In some texts by the Fathers wherein the attendance at public spectacles is also forbidden with comments and quotations from the bible, among them Saint Cyprian’s text titled “De Spectaculis” acknowledged under the authorship of Novatian and in that of Tertullian with the same title and also in Ad Donatum by Saint Cyprian, Novatian establishes idolatry as the mother of all diversions and confirms the prohibition for all Christians to attend the spectacles that promote gladiator games where “cruelty, vices and brutalities” are shown.

The Pauline pericope, wherein three Hellenic games are mentioned: races, wrestling and boxing, to compare them with Christian life, ends up being a quotation most preferred by the Fathers of the Church to exhort earliest Christians to remain firm in persecutions, imprisonment and martyrdom, but above all else when they seek to teach that the aim of the Christian is set beyond the finishing line of the races in the stadium, of the boxing stage and of the arena. On the same matter Saint Ireneus adding to 1 Cor 9, 24 ” tells that the contest, wherein Hellenic athletes trained in the palaestra and then competed before the public, constituted an extreme effort in search of a garland that soon, as Saint Paul puts it, “withers”, but that Christian life inspires a new way of thinking life as a contest.

Most sport historians trod the old path of spotting and quoting patrician sources to show a purportedly traditional hostile attitude from earliest Christian writers and so from the whole tradition of the Church to come towards games, sports and physical activity. As a response to this, we shall base our work on a thesis by Alois Koch in 1968 in Germany to whom the magazine Citus, Altius, Fortius published a summary in an article titled “About the Problem of Christianity and Physical Exercises”.

In that report Koch holds that the Fathers of the Church state clearly enough the prohibition to Christians from taking part in spectacles and games because by indulging in them they become accomplices of offences and of idolatry so spread in Roman games and in Hellenic ritual agonism. In exchange, they propose the practice of physical exercises without the pagan content.

Clement of Alexandria rejects the practice of games as an artistic representation shown as spectacle; that is, the game practised as lucrative profession, rejection that from certain contemporaneous European academic environments is made against the current industrialisation reached by sports in our time.

Another testimony offered by Koch in the article we have taken as reference is contained in the Letter to Diogneto, about which writes Koch, “it contains an emphatic approval of that environment and, although not an open approval of physical culture, the letter states that daily vital manifestations, according to such paternal customs, are kept after conversion and that Christians go often to gymnasia, public toilets, seeing yet in them pictures of old divinities but the pagan manners have already vanished.

So far it is evident that in Christian writings from the earliest centuries of the life of the Church the attitude from the Fathers as to spectacles of Hellenic agonism and of Roman recreation expressly forbids attendance by Christians as spectators. Now it is also clear that earliest Christians understood that these athletic practices kept the content of pagan religions already superseded by Christian spirituality and that besides promoted manners against the new way of understanding the body and the relations with others, in exchange they promoted the practice of physical exercises and likened them to the exercises of Christian spiritual life.

Statement of improvement of the patient's health and quality of life

The exercise of ambulation in psychomotor therapy