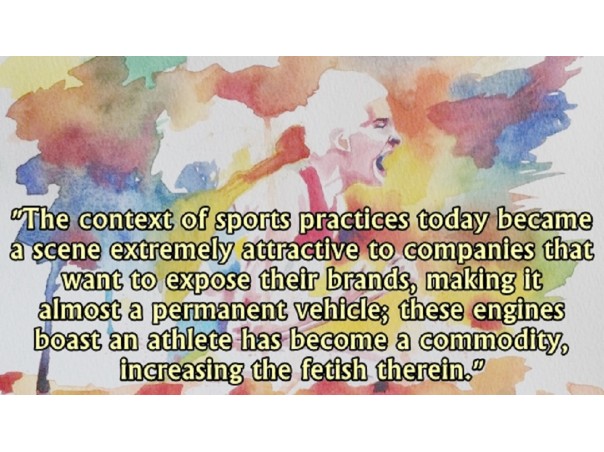 In the current context, the high performance sport is a social phenomenon that moves people and markets worldwide, arousing passions and extreme feelings, with visibility and major social upheaval, and enable us to transcend emotionally in many ways. The main cause of these feelings are your idols that stand out for their performance outside the medium and its identity with a particular institution, always present in the minds of viewers and of themselves practicing sports. Moreover, the process of commodification of these idols have become increasingly common, with strong influence of the media and directly to the public / fans who are consumers final and most important in this process.

The theme aims to understand how the fans / followers behave before an idol and as fetishism acts taking these athletes to success and eternalize them, a consistent interpretation of the humanities concepts already established and of great academic importance.

Training of athletes in the world capitalist

The specialization of sports triggers a series of effects for the athlete's life, in which to achieve goals athletes must dedicate themselves fully in their practice, leaving aside many other activities that have an ordinary individual, he learns to make little the frequent nights out with friends, having a healthy diet and live with the pain. To Marques, the demand for the expertise of an athlete culminated with beginning increasingly early careers of sports.

According to Diniz and Liming, the sport previously seen as an activity that aims to promote health, wellness, education and culture, has lost its meaning over time, since its image before considered synonymous with happiness and ascension social ruptured, and becomes a commodity and today gives way to the sport based on the media, so it can be said that the media today no longer transmits the sport, she transforms.

Nothing stirs a fan more than the demo delivery unrestricted by the athletes, where at times when winning or losing is evident that athletes abdicated themselves to donate to the team, are considered unforgettable moments for both fans and athletes.

Reference athletes are capable of interfering with an individual and even in a society; there are mechanisms that enhance this effect.

Thus, Marx understands this commodification of characters such as fetishism, which is when a process of transformation, in the case of an athlete, merchandise and society assigns values characteristics of the products, thus losing its natural value, in which production Merchandise fetishism and become inseparable.

To Pilotto, the idol cause major impacts on society, from the way you dress, to how to cut hair and encouraging children to sports practice. They quickly become linked to particular brand, losing its worth and as an athlete, becoming a commodity.

The media certainly have great influence on construction and promotion of the image of athletes, guiding readers and speakers towards the idol. When an athlete has a different presentation in a race or sporting event, the media takes sides and exposes the athlete as the ace of the match, the game's hero.

This idealization created by the media, often transcends the real, such as the exaltation of the former goalkeeper of Palmeiras, which is linked to a saint, being called “Mark”'.

Fetishism as the author discusses:

"The impression of a luminous object on the optic nerve is not presented with a subjective arousal nerve itself, but as a sensitive way of something that exists outside of the eye. But the act of vision, light is actually designed by a foreign object on another object, the eye, it is a physical relation between physical things. Instead, the commodity form and the relative value of the products of labor (in which he is represented) have absolutely nothing to do with its physical nature (or with the material relations arising from it). It's only a definite social relation between men themselves who gets in their eyes, the fantastic form of a relation between things.”

"Is what you might call the fetishism which clings to the products of labor as soon present themselves as commodities, and is therefore inseparable from mode-of-production. (This character fetish world of commodities takes place, as shown by the above analysis, own social character of labor that produces goods)."

Regarding the relationship of the goods and their social significance, the author discusses:

"The objectives useful only become general merchandise products work because they are proven, executed independently of each other. All these operations constitute private social work (global). Given that producers only contact by social exchange their products, just under this exchange that also claims the character (specifically) of its social work private."

As for the value of the goods the author describes:

"Only the exchange is that the products of labor acquire, as values ??social existence identical and uniform, distinct from its material existence and multiform as useful objects."

It is concluded through this study, that in a social context, the merchandise is responsible for covering job characteristics, hiding the social relationship between individual work, producers and total work, ie, the final products have become commodity and therefore inherent fetishism according to Marxist theory.

When inserted into a scenario of competition athletes gain more visibility, and are increasingly affected by process of transforming the simple figure of an athlete for media product. The media vehicles eventually transform the values ??of sports and are responsible for potentiating fetishism.

Some athletes have the opportunity to become idols, through sports and a good presentation of the impact that this good performance can result in society, so companies have used this factor to expose your brand, because the way the sport is almost always a good investment to profit.

In a capitalist world, the professional is affected at any time with the process of media exposure, without a gap in relation to Marx's theory, in which all merchandise is fetishized.