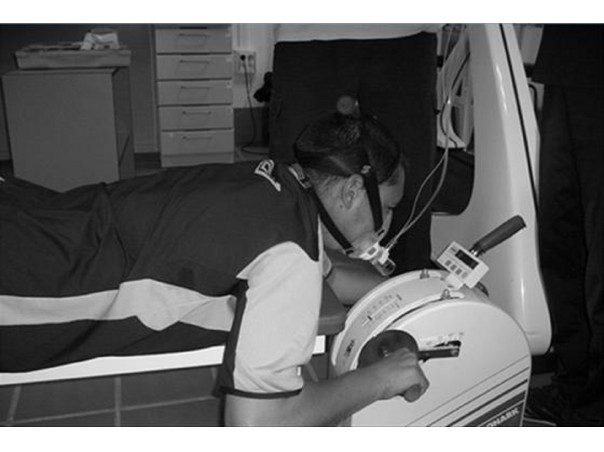 Muscle fatigue is a complex phenomenon that has been defined as a reduction in the force-generating capacity regardless of the task performe.

The purpose of this study is to examine how dynamic postural control as measured by the Star Excursion Balance Test, is affected by an activity related fatiguing protocol performed with the upper extremity and simulating the surfboard paddling performed previous catching the wave and how peripheral and central fatigue can affect this postural control.

In this paper the main interest lied in the interaction between Group (fatigue and control) and Time (pre and post fatigue). We wanted to know whether dynamic postural control of fatigue or control group depended on or was influenced by the pre or post fatigue condition, since significantly interaction was found (P = 0.013), we can say that our main findings were that the fatigue group decreased significantly with respect to reach distance on the posttest than on the pretest and decreased significantly with respect to reach distances compared with control group in the posttest. Our overall findings demonstrated a decrease in dynamic postural control as a result of fatigue as measured by SEBT.

A decrease in postural stability after fatigue has been found in previous studies using both central and local means of fatigue. Our protocol was designed to replicate the fatigue surfboard riders would experience during the course of a paddling action used to pass over the wave breaking section and then “catch” the wave. We feel confident that the changes in RPE scores demonstrated that our subjects were fatigued to a level representative of working at more than 100% of maximal heart rate or maximal oxygen uptake (VO2max) and that this fatigue elicited dynamic postural control during posttest.

Our group studied previously the effects of upper body fatigue in static balance (measure by the Romberg test), it must be known that this paper is the first one to report an activity related fatiguing protocol in the upper body and dynamic postural control, since most sports are dynamic in nature we think that postural control should be assessed using dynamic test to ensure the application of results. We feel confident that SEBT do not mimics surfing action completely, because there is not surfing action performed in a single-leg stance, but it gives us a valid score of dynamic postural control which is critical for success during surfing once the individual is standing on the surf board.

The present findings that balance decrease after fatigue has been demonstrated in investigations using various methods of causing central fatigue and different measures of postural stability, using varied fatigue protocols, several authors have found decrease in postural stability as measure by stabilometry. Nardone et al. noted significant increases in sway path in both eyes-open and eyes-closed conditions and increases in sway area in eyes-closed conditions only after a 25-minute treadmill run. In addition, a 25-minute cycle-ergometer exercise elicited a significant increase in sway path with eyes open, but to a lesser extent than after the treadmill exercise. A subsequent follow-up investigation using a 25-minute uphill treadmill walk also demonstrated an increase in sway path and sway area in both visual conditions after the exercise.

Our findings show a decrease reach distance in SEBT immediately after the fatigue protocol, demonstrating that balance ability diminished. The surfboard riders should improve their paddling capacity in order to avoid or delay fatigue during wave riding. Future investigators should find a more surfboard-related test to investigate if the decrease in balance ability really affects the wave riding itself. In the other hand it would be good to use surfboard riders as subjects since they must be used to the paddling exercise and the effects can be different. Our findings suggest that during surfboard training, surfboard riders should pay more attention of paddling performance in order to avoid the effects of fatigue achieved during the paddling action on the wave riding. We suggest that trainers should include in their programs some paddling related exercise such as swimming or rowing as well as paddling muscles working out.