The volleyball influences in students' skills, resulting in a full training, to enable better learning, achieved through socialization and playfulness applied 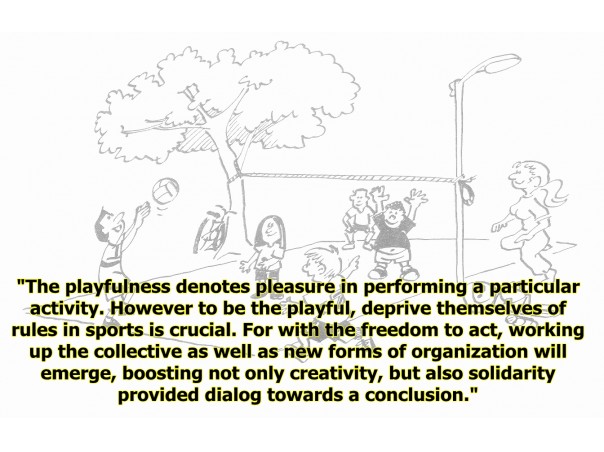 Volleyball spread rapidly due to its high content recreational, reaching prominence in the school through the large media coverage. The dream of becoming a volleyball player comes from the excellent and fast way to earn capital, inculcating in students the need to improve themselves through income.

Volleyball undoubtedly presents itself as a sport essential to free movement, the various ways to express a gesture engine; creating sports child, and bureaucratic rules, being of paramount importance in the physical and social education of students, repressing violent attitudes to arouse sympathy. Thus, one should emphasize both the technical foundations and sports training and simultaneously provide reflection of pedagogy used in school work.

The good results of this type grow gradually and with excellent achievements. Every Olympics, the content of volleyball at the heart of fans increases, the number of supporters progressing. The media contributes actively in the process, releasing the will to practice this sport.

This study consisted in developing a literature review on the relationship between volleyball and playfulness in the context of physical education, and the influence of the media in the construction of this knowledge.

The yield Volleyball arose after it is inserted in the Olympics (1964) and nationally, after victories in the Olympics in 1984, 1992, 2004 and 2008 in the male, the female. This sport started to be taken to the spectacle by changes in their rules, allowing the reduction of the time of the games to focus on television broadcasts, called the tie-break, created by the FIVB Foundation (International Volleyball Federation) in 1988.

The delay of game bored the audience, which had no motivation to watch it. After the changes significantly alter the configuration of volleyball, there was a reliable spectacle, reaching the stigma of popular dictating another fad to be worshiped. Reports short, easy to understand, give the audience a feeling of pleasantness to watch. Among the results of this popularity, are: the selection of volleyball shirts sold, more commercials aired by different media and different sponsors, realizing a large profit with spectacle of sports.

The practice of volleyball in school and playfulness

The sport can not be overlooked in school. In the case where volleyball is a team sport is a great option to be worked in the school, however, must be developed changes in the rules thereof to instill a playful nature in which certainly cover a greater number of students. Thus, students considered "less - skilled " did not feel constrained from participating in physical education classes which, the correct course would be to create the conditions so that students obtain autonomy in relation to physical activity.
Although the sport - performance bring both physical and psychological implications for individuals, it is considered a sociocultural phenomenon. Because the teacher can work with the biases involving concepts and procedures related to sports performance in the school environment such as discussing the high level of the sport and health, substance misuse and use of anabolic steroids to enhance results. Bringing this way, students to controversial issues with social and cultural characteristics.

Mesquita brings a pedagogical proposal for teaching volleyball at school, where signaling is primarily for the use of the game, playing it is a fundamental tool for learning, due to factors such as motivation and pleasure it provides. However she claims that the game held at initiation should not be the formal 6 x 6 (default), because the sequence of play is stopped due to the difficulty of maintaining the high ball. The author makes some recommendations to foster the teaching of volleyball in school:

Volleyball adapted to the school will promote interaction between learning mode with specific gestures of popular games and activities, making the learning more meaningful and there is an interaction between the games that students are familiar with the introduction of new moves. With this, find pleasure and motivation in education classes, therefore, when considering the specific activities it wished to continue taking pleasure in practicing them.

The school volleyball should not surrender to spectacle, as this entails individualism perennial front of a social climbing, serving exclusively the winners while the losers are relegated said those responsible sport spectacle, or the media.

The teacher has to provide the student a range of elements essential to their formation, breaking the monotony of perfection motor helps to demystify the inferiority of the less skilled, as losers and failures, design disseminated by the media. The playfulness, a major factor that has teaching entails the reduction of prejudice and gender inequality. The Physical Education teacher today have difficulties in materials needed to class, but for this there is the playful, because there are several forms of the subjects being discussed.

Work effectively with playfulness is necessary because sociability provides students with fundamental social life, teaching them values ??and global training.

Therefore, the split between spectacle and sport will be possible only when teachers and society they hold the awareness that we are alienated all the time, and recognize themselves, to intervene in new pedagogical reconstruction, with playfulness in volleyball.

With the strategies exposed, using the theoretical foundations of this study is to create opportunities for physical education teachers expand knowledge and the quality of teaching and learning, making lessons more enjoyable. Inserting adaptations in sport volleyball to practice in the school environment.

We emphasize the "power" which the media has on the sport and the need to introduce discussions about media influence in the educational field, in an attempt to intervene in sporting spectacle.