Multiple allusions in Ortega about sport, may help us to rethink the sense of sport in contemporary practice according with his overview of Vitality 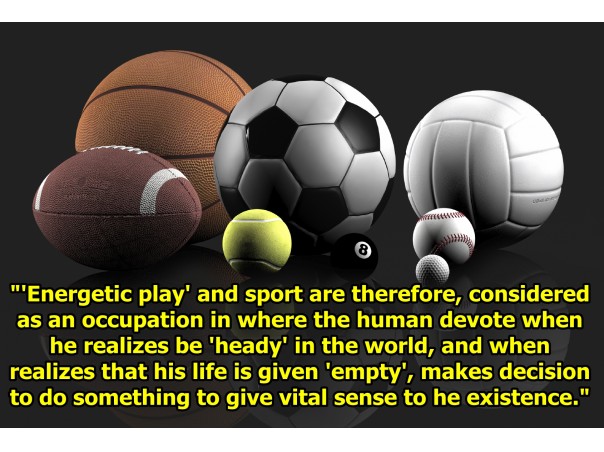 Along the eleven volumes of the Spanish philosopher’s, complete works José Ortega y Gasset, we can found multiple allusions to sport that they “incite" us to a systematic study about his philosophy of sport.

Nevertheless, the most outstanding aspect that his Metaphysics can contribute to the construction of the sense of the contemporary philosophy of the sport is in Lesson VI of his course "What is philosophy”. Exposed in Madrid on April 26 1926, in it he did presentation of philosophy as "the science of the sportsmen", since the philosophy conserves of the sport "Clean humor and rigorous care."

Ortega invites the onlooker of the philosophy to approach, not with the seriousness of being convinced, but to that, one enters in a "play" completing its rules.

This thinker From Madrid city, consult the platonic text “Sophists he episteme tón eleútheron" as his support on it, to stress the luddite sense of the theoretical act. Sport sense of the philosophy underlies, according to Ortega, in which both are "felicitous occupations", since human does not it is for survival material necessities, these he calls "hardship occupations"; but for "enjoyment", that is to say, for sport.

In this relief of the "frivolity" of the philosophy, Ortega brings an annotation that I want to highlight before international academic community of philosophy of the sport, because from there comes off his vital estimate for the philosophy and its exact appreciation for sport: Inside the biological and utilitarian man exists "luxurious and sport man" one. The philosophy is part of the illusion game, and in this sense, he locates the philosopher inside the group of men for "who the superfluous thing is the necessary thing."

In titled writing "The sport origin of the State", he sustains that on times of the primitive hordes, the boys of several hordes, by means of the instinct of "contemporarity", they associated for "to abduct" or "to hunt" the girls of other hordes. And in that "loving" enterprise arises an organization that required of hierarchy, rites and parties which produced the exogamy, the war, the authoritarian organization, the discipline of ascetic training, the Law, the cultural association, the festival of masked dances or Carnival and the secret society; that which "all this, together and differentiated: The irrational genesis of the State.

"Energetic play " and sport are therefore, considered as an occupation in where the human devote when he realizes be "heady" in the world, and when realizes that his life is given "empty", makes decision to do something to give vital sense to he existence.

His euro centric vision in connection with the new Ortega expressed one “sport phenomenon” that flourished at the beginning of the XX century in Spain, in following terms "Europe enters in a puerility stage ...seriousness be shipwrecks… "cult of body" be intensified and youth’s values triumph on those of the senility"; nevertheless he defines sport as: "the behaviour that the man usually adopts during brief moments in which sorelities and urgencies of the life, cease to oppress him and he is devoted, to amuse, to a game applied to the rest of life, that is to say, to the serious thing, to the painful of the life."

In this declaration, Ortega reaffirms the relationship among his "circumstantial" vision of the human life with the sport occupation, although "puerile", "luxurious", "distractive" and "escapist", he applies it in its contents of "fights" to the situations difficult of the life. The sport is then an existential paradox, where the man on one hand moves away from those "sorelities of the life", and looks for solve somehow, decision of "what to do" front of those circumstances of the life in which be heady. For that reason he categorizes sport as "a vital luxury", and the other hand he apply the games to fight in the life.

Luxurious sport practice assumed by “gentleman", it is taken by Ortega, like an possible ideal of sportsmanship in poor countries of our planet. Ortega redraws the sportsmanship and its "fair play" with some ethical dimensions that are expressed this way:

When human acquire full domain of circumstances in real life so much in the vital security as in calm of the spirit, then luxury is given like "fire play". Sport’s concept is extending toward some game’s categories just as; just play, truthful play, gratuitously play, and authentic game; whose ethical consequences are:

1. Playing is clean as soon as is not contaminated from extrinsic factors to their origin.

2. Playing is jut on sense in which player defends his rights and respects those of the other ones (duties).

3. Playing is truthful because player does not lie.

4. Playing is authentic because player does not falsify the game, and five.

5. Playing is gratuitously as soon as player does not look for any utilitarian purpose, but more than winning the game.

His better known work due to sport, hunt and bull references is "The hunt and the bulls", in its he makes a dissertation of sport hunt and useful hunt where relates the zoological character of this practice and exalts their ethical and anthropological sense, always in the same vital luxurious perspective of sport.