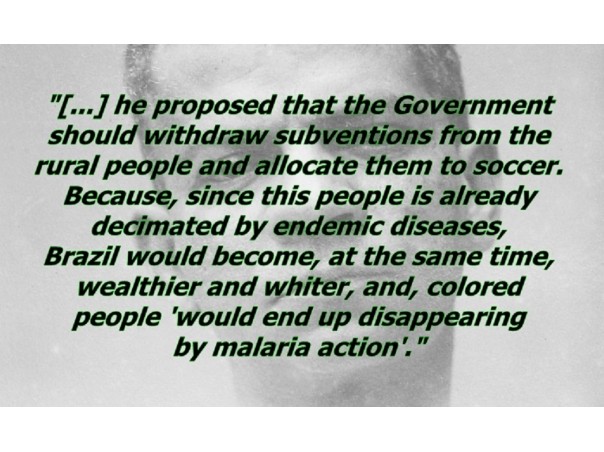 As we know, social phenomena gain certain analytical or analysis depth when focused in a historical outlook. Thus, the study to be employed provides plenty of theoretical elements for the reconstruction of a history of relations and their structures, seen through Brazilian literature, by one of the most outstanding men of letters of the early 20th Century.

Lima Barreto and his chronicles

In this article Lima Barreto’s criticisms can be analyzed in two moments: in the first one we have the knowledge of prejudice politics and the possibility of whitening Brazilian society/people. And, in the second, soccer is used to show the maneuvers of the elite of the time. It is in his writings published in collected writings Marginália and Feiras e Mafuás that we find the chronicles where soccer of the time is the target of his criticisms.

Lima Barreto, precisely around 1920 to 1922, published several articles writing ironically about soccer. By observing his publications, we find the chronicles Uma conferência esportiva, Bendito Football, Educação Física, Memórias da guerra, O trem dos subúrbios, As glórias do, all included in Feiras e Mafuás. We also have the chronicle País rico, Variações, Bônus da independência, among others, which deal with soccer, published in Marginália.

In 1920, L. Barreto publishes the chronicle “Bendito football”, reporting the news of Correio da Manhã, of September 17, reporting that the Colégio de Futeboleiros (College of Soccer Leaders)had secretly met to decide whether they could take to Buenos Aires, players who had, in their veins a little black blood – “colored men, finally”.

Barreto makes criticisms to the eugenics ideas of the time, though he has respect to the scientific character that they present/represented. The ideas, in the understanding of Barreto, go contrary to nearly half the Brazilian population, in its majority half-breed and black. He does not hide his resentment of soccer managers, in excluding the black player from the national team, with endorsement of the Republican Government. He accuses that not calling black and mulattoes was a way of the foreigner not seeing and knowing the humiliating miscegenation. In his article, Barreto exposes the boldness of sports representatives in appealing to the President of the Republic “that such ordinary and compromising people should not figure in exportable player teams; out there, he added, they did not have to know that we had such similar human manure in Brazil” (Feiras e Mafuás). His criticism to the elite that vetoes the black as an unpleasant object to Brazilian society, was already an act of sarcasm by Latin people themselves, Argentines did not distinguish the colors in the Brazilian. All were known as macaquitos. Before such attitudes, Barreto charges: that in order to take overseas the purest Brazilian race, The State has even hired anthropologists to examine “the extraordinary envoys and plenipotentiary ministers of the Country, “the great Arian intelligences and obscure individuals form part [...] all learned in several things and also federal deputies.

Lima Barreto criticizes and denounces the Government’s subvention to soccer, saying “what admires me, is that taxes, from which proceeds the fat subventions are apportioned to soccer societies and their faithful treasurers are withdrawn because a great part of them is paid by colored people”. And launching all his irony, he proposed that the Government should withdraw subventions from the rural people and allocate them to soccer. Because, since this people is already decimated by endemic diseases, Brazil would become, at the same time, wealthier and whiter, and, colored people “would end up disappearing by malaria action”.

Always using irony, Barreto does not spare criticisms to the intention of putting an end to part of the suburbs population. In Fair and Carnival published on 10.01.1921, we see:

“The greatest despots and the cruelest savages torment, torture their victims; but kill them at last. Kill the coloreds at once; and long live soccer”.

In the production/ work and social usefulness relation Barreto asks: what usefulness to society does this energy spending bring? What are these ball shooting and kicking good for and what benefit does society have?. His accusations in the journalistic and literary universe of the time Lima Barreto broke the colloquial language that men of letters of the time wrote. His language coherence was in a militant position and a cause, which he faced with skepticism, because elitist journalism of the time was disguised in eugenic prejudices. By the way, he says it himself in the chronicle Não queria mas... ,

“I was already willing not to talk any longer about anything similar to football; however, it is not possible for me to fail to do it, considering that it is a campaign of honor to which I have given myself and I do not give it up.

Concluding and classifying the analyses of studies

However, by way of a conclusion we classify Lima Barreto’s criticisms to soccer: a) Lima Barreto interpreted soccer as noxious to the great mass aggregation, understanding it could be one morepolitical-ideological domination instrument on the part of the State; b) Lima Barreto’s opposition to soccer, was as a result of clearly being oriented toward and practiced by the elite of the time; c) due to the fact that State sponsoring a sports, at the occasion, being understood as segregating.

Lima Barreto, black and poor, wrote against the renewal of prejudices and making language elitist. A language in his chronicles that breaks with Portuguese language traditionalism. This characteristic, however was his manner of approaching the people, to show that what was seen was a false Brazil.

Rehabilitation and evidence in psychomotor stimulation of patient with Multiple Sclerosis